The 2015 Rugby World Cup was the eighth Rugby World Cup, the quadrennial rugby union world championship. The tournament was hosted by England from 18th September to 31st October.

Between the months of September and October 2015, the world’s eyes were fixed on England for the highly anticipated quadrennial Rugby Union World Championship, more commonly known as the Rugby World Cup.

The nature of the competition commands global interest; due to high levels of tourism and media attention, the RFU (England Rugby Football Union) contacted specialist companies from around the UK to transform the country into something spectacular.

In May 2015, the RFU contacted Indigo with the potential to become a supplier for projects in preparation for the upcoming Games. They were asked to provide advice about which parasols were deemed appropriate for Fanzones across the country.

The Fanzones were spread across England, giving fans the chance to enjoy the unique atmosphere of the Rugby World Cup 2015 and join in the nationwide celebration of rugby. There were a total of 15 Fanzones, 12 of which were assessed by Indigo.

After conducting a site survey, Indigo suggested using the A4 Xtreme range, able to withstand wind speeds of up to 110 kilometres per hour.

The RFU agreed with Indigo’s recommendations and enlisted their services to transform these high profile sites. It was concluded that each of the 12 areas would be fitted with a heavily customised A4 Xtreme giant parasol, measuring 5 metres by 5 metres.

Giant parasols are usually installed in in-ground sleeves; however, this was not an option for any of the locations. Indigo tackled this problem by making special bases with up to 50 concrete slabs fitted to each, ensuring total security. 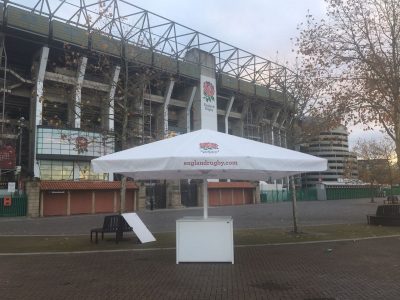 To cover these bases, metal Poseur tables were specially made and powder coated in white, doubling up as literature and merchandise tables (depicted above).

Throughout the duration of the Rugby World Cup 2015, the Fanzones were filled with excited locals and tourists alike, with the areas boasting some of the highest rates of global tourism at that time.

Much like the installation of giant parasols for the 2012 Olympics, Indigo view this as a huge milestone in achievements, with contractors expressing their utmost delight at the end results.

To enquire more about Indigo’s range of parasols and other outdoor shading solutions, call 01352 740164 or email enquiries@indigoawnings.co.uk

Note: Unfortunately, other than the image on the left, circumstances dictated that Indigo could not photograph these giant parasols as all of the Fanzones were still under construction when installation took place; the images above were taken in Trafalgar Square while the Games were taking place. Included in the images above is a representation of the parasol from a birds-eye view.

Get in touch with the Indigo Awnings team today.